“Can't believe the settlement their lawyers got in our car accident case.
Thank you on behalf of the whole family!”

“Can't believe the settlement their lawyers got in our car accident case.
Thank you on behalf of the whole family!”

Couture Law P.A. fights to get you paid

No one expects an accident to happen. Nevertheless, everyone should know what to do in the event of a personal injury or wrongful death. Accidents that are caused by someone else’s behavior and result in injury are generally referred to by lawyers as personal injury cases. Personal injury accidents that cause another person’s death are referred to as wrongful death cases. In either situation, the injured party and their families may be legally entitled to compensation. Florida personal injury attorneys help accident victims receive the compensation they need for resulting expenses and, in some faces, for pain and suffering.

Our Experts Get Results

Our client was taking a leisurely ride on his motorcycle. He was travelling at 35 MPH, the speed limit in that area. All of a sudden and unexpectedly, a motor vehicle pulled out directly into his path, violating his right of way, and causing the front of his motorcycle to collide with the front right quarter panel of the motor vehicle. Our client was ejected from his bike, and died at the scene moments later.

Attorney Brent Couture reached out the this insurance company to see if they would do the right thing given the obvious negligence on their insured and the unimaginable damages. However, their first reaction was to insinuate that our client was likely speeding and thereby caused or contributed to his own death.

We were successful in finding a witness who was directly behind our client and could attest to the fact that our client was traveling at or below the speed limit and driving in a safe and reasonable manor. Our crash team pulled the data from the motorcycle and from the onboard computer inside the defendant’s vehicle. From this data, we were able to prove that the defendant’s vehicle pulled into the path of our client, giving our client no time to react or avoid the collision. After we presented the insurance company with our findings, they tendered the insurance policy limits of $2.5 Million (combined).

Defendant turned left in front of our client giving him no time to stop or avoid the crash.

This resulted in a T-Bone impact which rendered both vehicles a total loss. Our client required a Spinal Fusion Surgery.

The at-fault driver carried a $100,000 bodily injury insurance policy and our client carried an additional $10,000 under-insured motorist policy. The other party’s insurer only offered $11,000. Our client’s offered $0.

Couture Law P.A. was successful in getting the other party’s insurance company to pay $175,000 more than their policy limits for a total of $275,000.

Client was represented by a famous TV Lawyer for this minor rear-end crash. TV Lawyer tried to pressure him to settle his case for about $6,000. The client did not think this was fair, and called Couture Law P.A. Attorney Brent Couture visited him at his home and discussed the case with him and his family. Mr. Couture agreed that his case was worth much more than the TV Lawyer had suggested. The client then fired the TV Lawyer and hired Couture Law P.A. to take over the case at no additional cost.

The insurance company argued that the injuries could not have been caused by such a minor impact, and that our client had a long history of injuries to the same or similar body parts. Couture Law P.A. argued The Eggshell Plaintiff Doctrine: “plaintiffs are entitled to recover full compensation for all damage proximately resulting from the defendant’s negligence, even though their injuries are more serious than they would otherwise have been because of pre-existing physical or nervous conditions.”

Client was represented by another Local Injury Attorney who tried to settle her case for less than $25,000. Client did not think this was fair, and called Couture Law P.A. for a FREE Consultation. She met with Attorney Brent Couture to discuss the details for her case. Mr. Couture agreed that her case was worth much more than the other Local Attorney had suggested they settle for. The client then fired the other attorney and hired Couture Law P.A. to take over the case at no additional cost.

The driver of a Chevy pick-up truck ran a red light at approximately 35 MPH and impacted a Honda Accord which was traveling through the intersection on a green light. The Accord spun counterclockwise and was propelled into our client head-on. Our client’s vehicle was rendered a total loss. Our client suffered permanent injuries to her neck and low back as a direct result of this motor vehicle crash. Surgery of the cervical spine was eventually required. The insurance company argued that our client had significant gaps in her treatment after the crash, which they believed proved that the treatment she had undergone was not related to the crash and was thus not compensable. Couture Law P.A. was able to resolve this case for $300,000.
MORE NOTABLE CASES 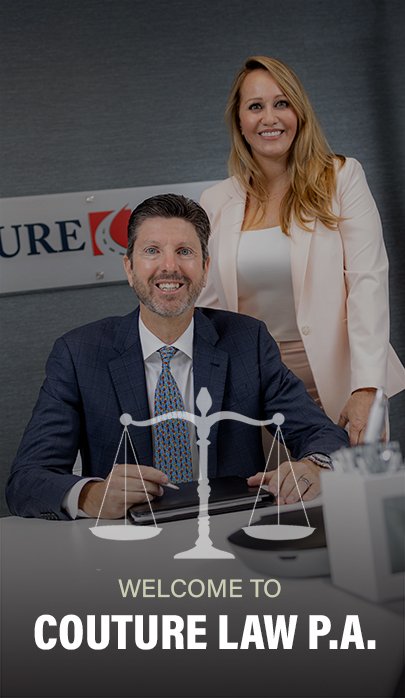 The exhilarating feeling of traveling at high speeds in the open air makes motorcycles an attractive mode of transportation for sightseeing and commuting around Florida. Unfortunately, motorcycle riders are more susceptible to injury in the event of a crash. Drivers are sometimes unaware of best practices for sharing the road with motorcyclists. In other cases, motorcyclists execute risky maneuvers on the road. Florida accident attorneys are available to represent motorcyclists who are injured in traffic accidents. Personal injury lawyers enlist the help of accident reconstructions and may call on eyewitnesses to establish the other party’s negligent fault in causing the accident.

Commercial truck accidents differ from other automotive collisions in several ways. Several parties may be liable in commercial truck accidents. Potentially liable parties include the commercial truck company, the truck driver, the cargo loading station, and the manufacturer that produced the involved truck and truck parts. Similar to people who drive passenger vehicles, truck drivers are at a greater risk of causing an accident if they are intoxicated, speeding, distracted, or drowsy. These factors can affect a driver’s perception, judgment, alertness, and reaction time. A driver who has impaired perception may not recognize a potential road hazard. Compromised judgment can cause a driver to create hazards by taking unnecessary risks. Because trucks are much larger than passenger vehicles, commercial truck accidents have a greater potential to cause severe injuries and affect multiple vehicles.

The statute of limitations for most personal injury accidents is four years. Therefore, victims must decide within four years of the date the accident occurred whether or not they will seek compensation in court and actually file the claim. The statute of limitations for wrongful death cases is two years. Under certain circumstances, a court may modify the date by which an accident victim must file a claim. Examples include:

It is always best to contact a lawyer as early as possible following a personal injury. Beginning the process of seeking legal counsel earlier means your attorney will have more time to investigate the accident, gather evidence, and properly file your claim. If you believe your case may have exceeded the statute of limitations, a Florida personal injury lawyer can determine whether your case may qualify for an exception.

Contact our Florida personal injury lawyer to learn more about options for receiving compensation following an accident. Our attorney will provide a free case evaluation and discuss the best legal options that may be available to you.